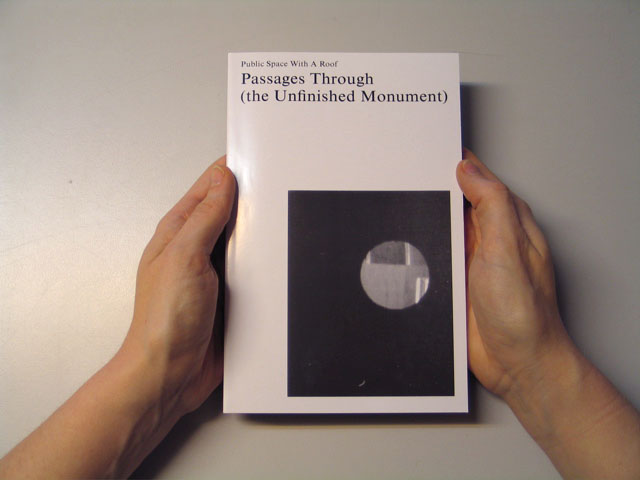 Passages Through (The Unfinished Monument)

by Public Space With A Roof

The book Passages Through (The Unfinished Monument) is a story about a project that never happened. Commissioned by KIASMA Museum in Helsinki, Finland, the project was canceled two weeks before its realization. The sudden news came as a surprise, nullifying months of work and raising the questions regarding the disempowered position of the artists today. As a way of confrontation with the traumatic experience, the idea of creating a book was conceived. The essential part of the original project was an installation built for that particular space, made of three intersecting Möbius strips ‘circling’ around the gallery, and functioning as a platform for the works of other artists. For the book, we created a model of this structure and used a pinhole camera to photograph it, which resulted in a series of photographs giving the structure a form and ‘life’ we previously did not anticipate. On the images, the structure is still visible, but their blurry and foggy atmosphere shows a different universe, closer to the world of dreams and imagination. The discrepancy between the world of ideas and the possibilities of their execution in the ‘real’, material world functioned in itself as another Möbius strip that brought us back to our starting question. As it seems, there is no need for censorship today due to a fact that particular artworks will never be produced in the first place.

The book includes 17 series of photographs, each of them offering a different imaginary walk through the structure, a walk accompanied by the fragments of texts by several individuals who inspired us while working on the project: Vladimir Odoevsky, Frederick Kiesler, Walter Benjamin, Susan Buck-Morss, Juhani Pallasmaa, Italo Calvino, and Steven Holl. The book is also accompanied by our own theoretical reflection on the artistic process and the experience we went through after the cancellation of the project, written by Vesna Madzoski.

Public Space With A Roof (www.pswar.org) is an artists’ initiative founded in Amsterdam in 2003 and is a collaboration of the artists Tamuna Chabashvili (Georgia, 1978), Adi Hollander (Belgium, 1976) and theoretician Vesna Madzoski (Serbia, 1976). From 2004 PSWAR has produced large-scale projects, blurring the borders between various roles today’s artists are assumed to take: artists-as-activists, artists-as-producers, or artist-as-curators. The essential part of each project is an installation which functions as a public space, a framework for the whole project and an open laboratory. In here, different artworks, theories and ideas are encountered and viewed from new perspectives, reflecting the questions posed at the beginning of the project and simultaneously rejecting the position of closed and final answers. PSWAR projects are research-based and address various questions central in current art production: the possibility for collaboration and collective action, development of new exhibition formats, creation of platforms for intimate and individual experience of artworks, the use of others’ artworks as ready-mades, and the possibilities for sensory activation of the spectators through changed parameters of the space.

Passages Through (the Unfinished Monument)

A project initiated by: Public Space With A Roof  - Tamuna Chabashvili, Adi Hollander, and Vesna Madzoski

Editors: Public Space With A Roof

A selection of photographs were presented at a solo-exhibition Passages Through (The Unfinished Monument) at Kiesler Foundation, Vienna, Austria

The book was presented on January 29, 2010 at Salon für Kunstbuch, Vienna, Austria