“Farmer Mu gets off on daily life. He sees the usual separation
between work and play as unhealthy. He does his thinking
when drinking with friends. He says he can draw and have sex simultaneously.”
Unknown art critic (2005)

Mu Yuming’s voluntary refuge into the art world started from his impossibility to define a happy and united identity. Being of half-Han and half-Naxi ethnic origins made him feel like a stranger in both groups. As a way out, he has chosen the shelter of the assumingly free space of the art world as a way to redefine not only his own identity, but as a way to question every existing system of beliefs and rules. His never-ending energy, passion, play and lack of fear before chaotic structures, demonstrate his belief in the change of the world through artistic practice. Yuming’s concept of change is not an utopian one, it is not projected into the far future: he believes in change now. Based on ancient Buddhist wisdom, every action produces its effect in the future and the only way to start changing the future is to start changing the present.

Mu Yuming defines his existence in the art world as a temporary one, as one step toward his great goal in life to become a humble farmer, Farmer Mu. Through this inversion, he redefines the existing definitions of both farmers and artists. Farming is usually seen as a natural occupation, something anyone can do within the right circumstances. In order to become an artist, a human being must go through a whole system of rules and disciplines that aim to produce the artist in him. Yuming turns this relation upside-down: farming is more serious than what it seems to be and there is a long way of preparations one has to go through to be a good farmer; from the other side, he believes that art is something that should be practiced spontaneously, naturally, without the burdens and limitations of a system. 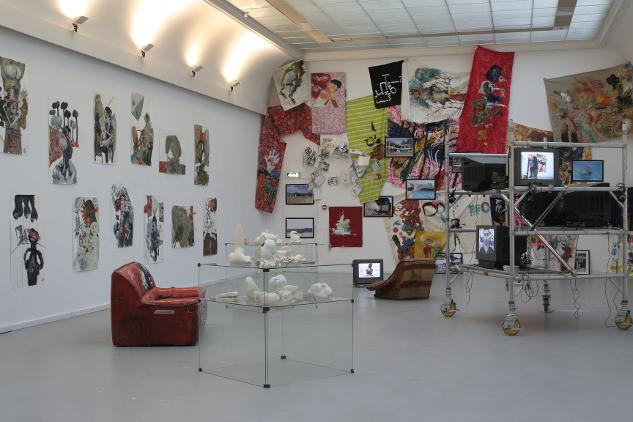 Being aware of the construction of the world as formed by binary oppositions in which all are entrapped, Mu Yuming begins his adventure in identifying these groups and bringing them in a position of interaction. Art/nature, society/ art, nature/society, humans/pigs, artists/common people, man/woman, earth/sky… in Yuming’s universe, their interactions range from peaceful conversation to violent confrontation. Used only as starting points in his experiments, Yuming puts them in a state of chaos and disorder and forces them to redefine themselves by themselves. The world is not as black and white as we have learned to see it.

In a formal sense, this spontaneity and freedom are clearly visible. Mu Yuming is not afraid of combining tradition with the (post)modern, East with West, dreams with reality, teaching us again that the greatest force of creation comes from chaos: beauty is usually born where nobody expects to find it. Different mediums and media are different channels through which Yuming expresses his thoughts, doubts, questions, frustrations, but they always bring somebody else, or the Other, into this dialogue. Behind all of them there is one recognizable source: Mu. Being aware of the complexity of his own identity and its connections with the surrounding society that formed him, he in turn influences the society. This dialog between identity and its surrounding becomes transformed into the cycles of never-ending mutual influences and constant changes in both. Just as identity is not something petrified and fixed, the same follows for existing reality. Art practice becomes one of the channels through which one might work on this process.

Returning to Yuming’s current mission of becoming the farmer, the hypothesis of the sociologist Manuel Castells comes to mind: according to him, the biggest threat to the existing system of corporate capitalism are independent and self-sufficient farmers who grow their own vegetables and never leave their plot of land. These independent units are being out of reach of today’s big games of large-scale exploitation and seemingly are the only position where actual freedom can be fought. As farming brought crucial change in the survival of past civilizations, maybe the next step, as suggested by Yuming, lies in the art practiced the same way - by the common people. Having in mind the strength and size of the supposed enemy, it seems that the army of future farmers will be more than necessary.