To make a dadaist poem take a newspaper.
Take a pair of scissors.
Choose an article as long as you are planning to make your poem.
Cut out the article.
Then cut out each of the words that make up this article
and put them in a bag.
Shake it gently.
Then take out the scraps one after another in the order
in which they left the bag.
Copy conscientiously.
The poem will be like you.
And here you are a writer, infinitely original and endowed
with a sensibility that is charming beyond the understanding of the vulgar.

Having found herself unexpectedly in a Kafkian novel in which the hypocrisy of the justice system is performed on her own body, Lucia Macari decided, after having been beaten up by the local drunks on the street, to confront her trauma while holding special scissors in her hands. Cutting into small pieces not only her own memory of the incident, but also two other narratives created in the police station – one of the perpetrator and one of the protectors of law and order, Macari creates the same atmosphere of absurdity with which she was forced to live. Having been placed in an inverse position in which she, as a victim, had been accused of giving false evidence, Macari intelligently uses the strategy of over-identification and transposes the whole traumatic experience onto another level. Because someone had already performed hip-hop on her bones, all she can do is perform it over and over again for the rest of the public.

The language Macari decides to use is the language of collages, comics, and pop-culture. Referring to Soviet practice during the Cold War when illegal pop music from the West was secretly engraved on the vinyl of X-rays of body parts, Macari returns to this historical period of collective trauma which nobody seems to remember anymore. Becoming a tragic pop star, Macari symbolically reworks her trauma by breaking the silence and secrecy that usually occurs with similar issues. The unspeakable is materialized through the tattered fragments of images and words of the black and white world where good and evil are able to exchange sides within the span of a second. 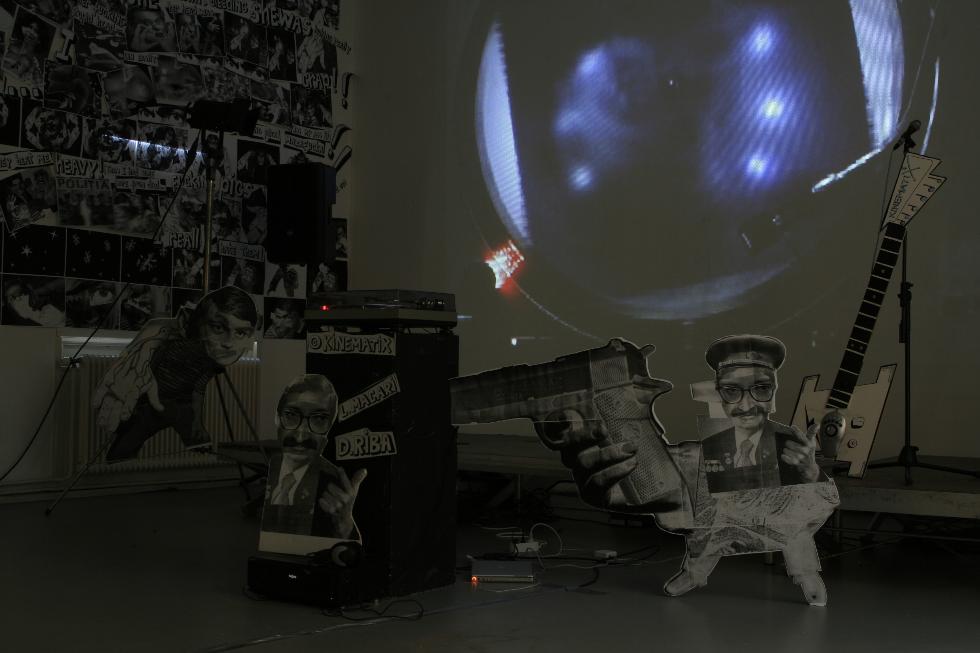 Developing the strategy used in the visual material further into the performance and media spectacle, Macari, in collaboration with D. Riba, creates a synaesthetic experience with the aim to involve the majority of the senses of the spectators. Their spectacle is again a (dis)play of over-identification with their assumed identities: they will look just as you would imagine ‘Russian’ pop-stars, confronting you with your own projection of cultural stereotypes. Put in this light, popish way, this image is reflected back to you through comics on stage that appear not so comical after all.

Hip-hop on Bones summarizes in the best way the artistic practice Macari develops in her works: playing with the accepted images and roles in society, she manages to find cracks in the systems of personal and collective memory and make them visible to everyone. On a formal level, her choice is re-examination and re-interpretation of the practices of the historical avant-garde movements. Not limiting her expression to only one, Macari brings together Dada, Pop, situations and spectacles from the streets, creating art works based on fresh and astonishing ideas.