This year, IAFF goes green. The environmental problems have been around for a long time - they are not new. We are all aware that the sustainability of the present system is an absolute impossibility. The question is no longer "IF" but "WHEN" and "HOW". In this year’s edition, we will explore how wired art practices, environments, and interventions contribute to the discourse on sustainability.

In recent years, the artists have become the forerunners or the avant-garde of raising the awareness and the dangers humankind has created with its natural environment. They offer us valuable insights and possible solutions on how to understand and practice the complex interactions that occur between the technological, social and natural systems that we inhabit.

While systemic change is no doubt needed, it must be accompanied by all of our individual transformation into local brokers within our own designed environments, and the artists are the one offering us new solutions and modes of this relationship. After all, environments do not exist, they are imagined and re-imagined, and when it comes to imagination, the artists are the one here to inspire us for future transformations.

Beside the works that directly deal with the questions of our relationship to nature, Wired Suicides also presents works that belong to the category of ‘ambient media’, or the works that are part of the new (media) environments created by today’s artists. The ambient media is considered to be the intersection between the wired, the sustainable, and the environmental, in the same time involving design and visual experimentation.

The purpose of presented artworks will be to disturb the protected world we inhabit today in which things just happen and nobody takes responsibility for. We see this ‘green’ phase not as something that should be promoted as a passing fashion of the moment, but as something that has to be integrated into our thoughts and lives. If that does not happen, we might be reaching the phase when humankind will reach its final moment of ecstasy while watching its own total destruction, its own collective suicide.

Brad Downey is one of the most original urban artists who changes the city landscape on the everyday level. You will be able to see his stunning installations on two prominent locations in Amsterdam. Leidsaplein & in front of de Balie, October 10-20.
IAFF screens Downey’s first film, Public Discourse, a documentary about street art with works by Swoon, Ellen Harvey, Keith Haring, JJ Veronis etc. featuring music by Japanther. The artist will be present after the screening at the “Urban Cookbook Party” in de Balie Foyer with live cooking by KING ADZ. De Balie, October 16, 8pm

As one of the main events, IAFF premiers this short, creative stream-of-consciousness documentary full of raw poetics linked to music and street-art. The documentary was shot in Paris, London, Berlin and Amsterdam, to accompany “The Urban Cookbook” - a cookbook with a difference published by THAMES & HUDSON in September 2008. Come to taste these urban recipes prepared by King Adz personally with the assistance of the Dutch-based urban creatives he interviewed for the film: The London Police, Laser 3.14, Helmut Smits, Erik Kessels, Miss Blackbirdy. This event is co-sponsored by Thames & Hudson (London, UK) and the American Book Center (Amsterdam). De Balie, October 16, 10pm 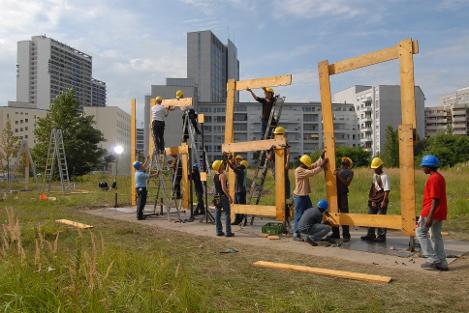 Seventy workers are building a wooden 4 x 12 m "digital" time display in real time: they rebuild it 1611 times within a 24-hour period. Time marches inexorably on, and we can never be sure if these “timeworkers” will complete the next display in time. But this video is more than merely a document of a performance: it is a clock that shows the viewer how much time is left until the next screening. De Balie,  Melkweg,October 16 – October 19 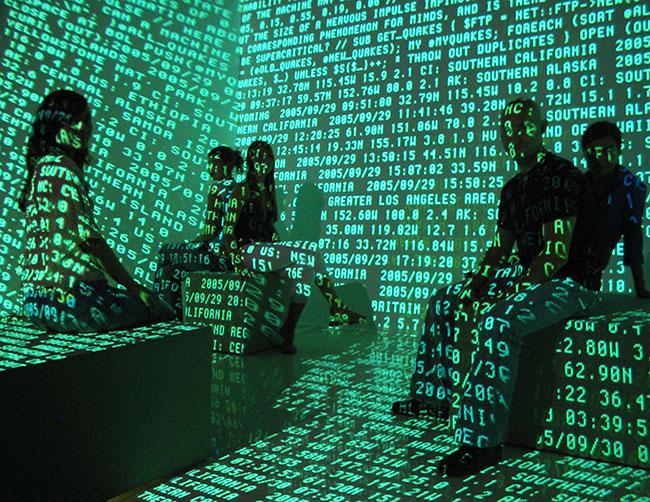 Based on the machine-theory of the mathematician Alan Turing, Franz John takes live seismological data and turns it into pictures, sound and movement. The project is not about the catastrophes that cause these movements in inhabited areas, but instead about the archaic feeling and consciousness that the earth is an organism, that it moves and that it can be understood as an organism in constant flux. Melkweg Mediaroom, October 16-19 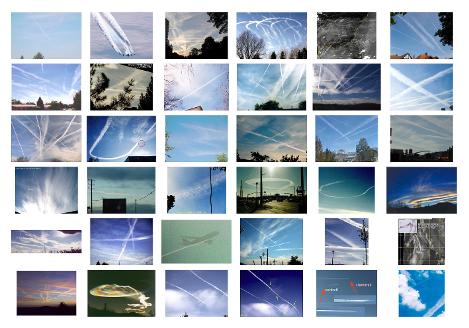 In this video, Keller brings our attention to the contamination of the Earth from the largest scale – aeronautics. After watching this video, your innocent view on the blue skies above Amsterdam will never be the same. Melkweg Mediaroom, October 16-19 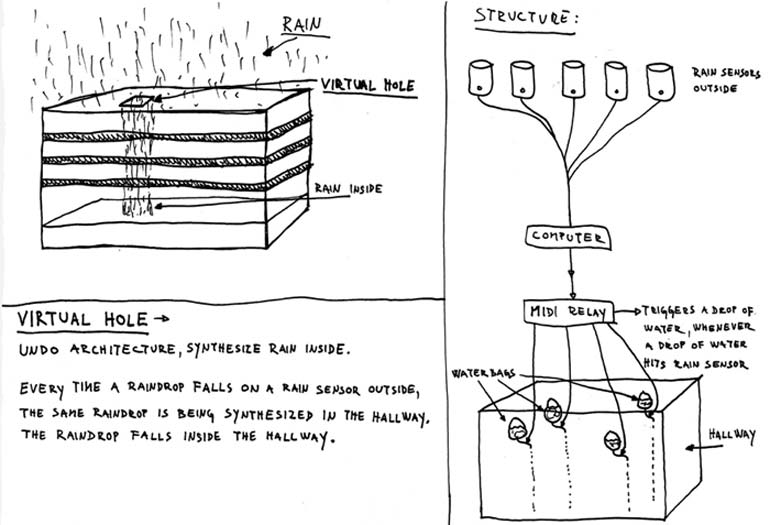 This is a new installation in Sambolec’s series of works whose aim is to undo the architecture and make it transparent for the weather phenomena. In its subtle and discreet way, this work makes all participants aware of the protective function of the human-built architecture, in the same time confronting us with the reality of the survival in the outside world. Melkweg Mediaroom, October 16-19 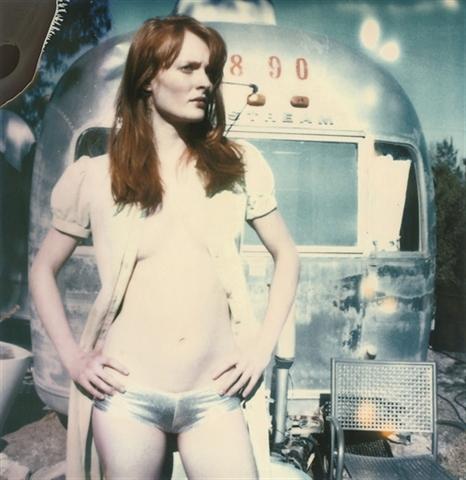 This work in progress is a feature film/art piece that explores and chronicles the dreams and fantasies of a group of people in a trailer community in the California desert. The world depicted in the film is inspired by the photographs of Schneiderin that it combines the notions of reality and fantasy. The story is partly a biography and social commentary, and the characters are the exaggerated alter egos of the individuals who play them. The work was premiered at Berlinale 2008. De Balie Foyer, October 16-19 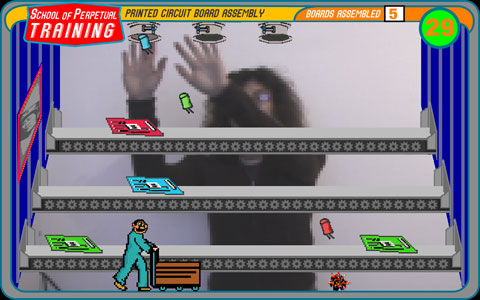 Stephanie Rothenberg’s interdisciplinary practice merges performance, installation and networked media. “School of Perpetual Training” exposes the underbelly and not so glamorous side of the computer video game industry. Designed as an ironic corporate training video, a virtual personal trainer leads players through a series of physical exercises for outsourced jobs in digital game manufacturing and distribution. Players learn about unfair labor practices and environmental concerns caused by the industry. De Balie Foyer, October 16-19 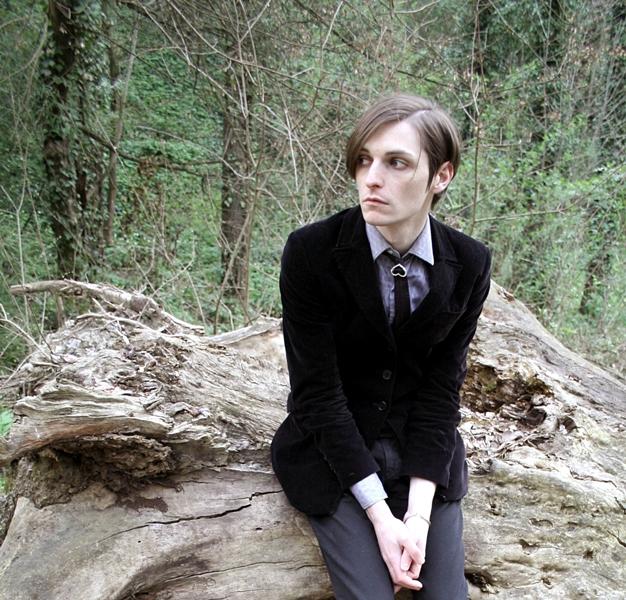 ‘Hear With Heart Cinema’ is a project by Jerome Symons (NL), consisting of a one person cinema that presents works of independent filmmakers 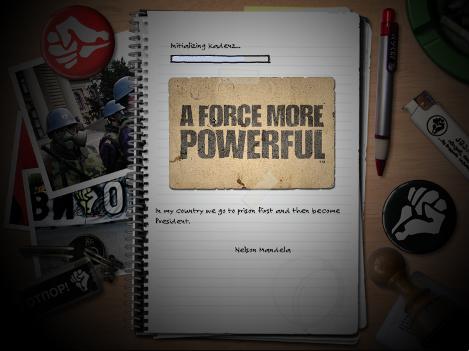 This unique video game teaches you how to defeat dictators, military occupiers, and corrupt rulers – not with laser rays and AK47s – but with a non-military strategy and nonviolent weapons. Featuring ten scenarios inspired by history, it simulates nonviolent struggles to win freedom and secure human rights. Nonviolent conflict is a way for ordinary people to fight for their rights using disruptive actions such as strikes, boycotts and mass protests. Developed by The International Center on Nonviolent Conflict (ICNC), media firm York Zimmerman Inc. and game designers at BreakAway Ltd., the game is built on nonviolent strategies and tactics used successfully in conflicts around the world. De Balie Foyer, October 16-19 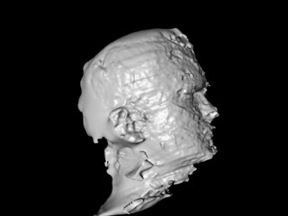 Can you imagine how would your face look like in the new Radiohead video? Using his 3D scanner, Davila translates the reality of our bodies to a new environment, where the skin colors fade and new human features emerge. DeBalie Foyer, October 16-19 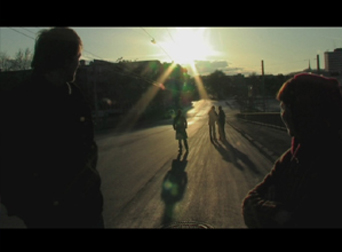 At first glance everything seems motionless:a street, passers-by, a sunset, all accompanied by electronic humming. But the apparent stillness of the shot turns out to be deceptive: While no movement can be seen, the figures’ shadows have changed, and a third suddenly leaves the cluster it formed with the other two. This unique visual experience consists of a single 15-minute shot with the aim to test you perception and play with the deception of the images around us. DeBalie Foyer, October 16-19 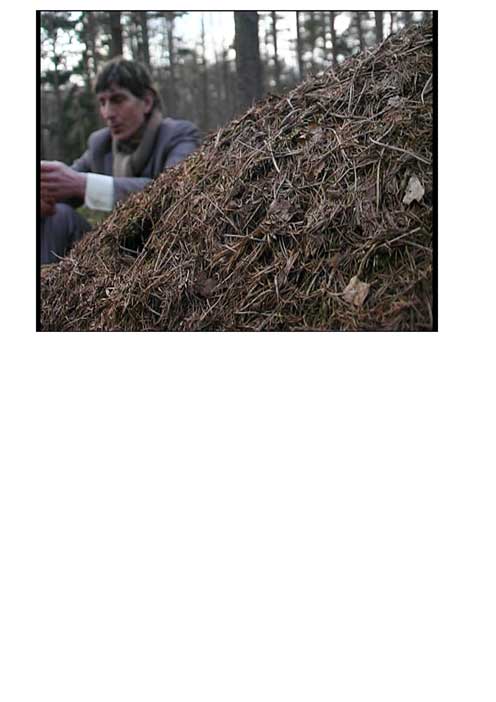 An architect is talking in a deserted forest.He talks about the limitations of architecture. About change. About the potential of unstable territories.An anthill nearby gives its comment in silence. Their genetic brilliance isconquering the power of his imagination. Through their imaginary character of William Living, Wergius and de Leeuw tell a story of survival and remind us of utopian dreams offering us a stunning visual experience. Melkweg Mediaroom, October 16-19